The leaderboard resets every day, this means that McDonald's is giving away an iPhone X every day to whoever ends up number one that day (this is done for a whole month I guess). Of course, there is a downside to this game, to make an actual 'high' score, you need to compete against other people. The thing is, you spend your 'loyalty points' to buy lives in the game. For those who don't know what 'Loyalty Points' are, they are points you get after making a purchase (spend €1 in a McDonald's restaurant and get 10 points or something).

To get started, I fire up mitmproxy and configure my phone to use my laptop as a proxy. I can now monitor all responses and requests coming from my phone, including the ones sent to the McDonalds server. I have the minigame open and I can already see my screen filling up with requests while playing the game on my phone. 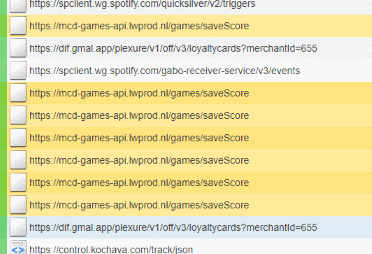 As you can see, the URL contains the words mcd-game-api and saveGame, this took my attention, and after having a proper look at it, I can confirm it's coming from the McDonalds FriesHit game. Now, let's see what's in the body...

Do you see what I see? Base64!
Yes that's right, after decoding these strings you get some nice readable data. Below is the decoded result:

The first thing that catches my attention is, of course, the JSON data, we can see that it contains all the game statistics and isn't that exactly what we need? Another thing that got my attention is the "startTime" value of the JSON, it's identical to the value of 'd'. It's safe to assume that 'd' is the startTime. But what about the other values? Well, one thing we can try to do is send a request and leave out the value of 'a' for example. After doing that, I got this as a result:

Do you see that? The server tells us that the 'noGameId' is not set, we just figured out that 'a' stands for 'GameId'. Here is what each variable represents after doing the previous steps for each variable:

Anyway, now that we know what the packet contains, we need multiple packets to see how they behave. While I started playing the game, the below packets got logged. I paused the game after reaching stage 5 in the game with a score of 48. Lets have a look:

FYI the first 'stage' I played had 5 fries to shoot, for each of them I get 1 point, plus 2 extra score for completing a normal stage. The 10th stage is a 'boss' level, those give an extra score of 5 (instead of 2) when completed.

Now you can see that the first packet registered 7 points, that's because I shot 5 fries and gained 2 extra points for completing the level. The value 'stageScore' is equal to 7 because I have gained that much of a score on that stage. The value 'stage' is set to 1, in the next packet its 2, third packet its 3, and so on. We now know that the packet is sent out every time a level is completed, now let's see what happens if we die.

After killing myself in the game, I saw that my packet had set 'lives' to 0. This means that the client only sends packets when a level (stage) is finished or failed. The last thing we need to know to start sending valid packets ourselves is how the scoring system exactly works. The big question is how many fries does each level/stage get.

While I am playing the game I keep track of how many fries I have at each level. It turns out that sometimes you get 1 frie more or less. The results are the following:

I am not 100% sure they are always like this, but the results are close enough. Each of the normal stages only took a few seconds to complete, and you can just tap your screen as fast as possible and you will complete the level/stage within seconds. This is not true for the Boss level, a boss level is when Stage % 10 == 0, the level has a timer on it, the lowest timer I have seen is 25 seconds. We have to keep these 25 seconds in mind or the server might notice we extend this timeframe and our packet won't be valid (assuming that they check packets at all, I won't be surprised if they didn't).

Alright, now that we know how to craft a valid packet, we can start sending them! The pseudo code for the packet logic I made looks like the following:

NOTE: the C# project is located on GitHub and can be found here

The above pseudo-code should send valid packets based on the knowledge that we have. My project on GitHub contains a bit more code here and there to make sure that the exactly given goal is reached. That's just a funny little thing I decided to add so that I can place myself in the leaderboard at number one with a score difference of exactly 1 point.
Can you imagine how the guy in second place feels when he sees my score that's just 1 point higher than his? There goes his iPhone reward.

Reversing the Game itself

After doing all of the above steps I managed to find the source code of the mini-game. It turns out that the mini-game is hosted on a website called 'mcdorehitfrieshit.lwprod.nl', the URL was visible in some of the headers of the packets I sniffed.

Doing a quick google search for 'lwpord' lead to a website called 'livewallconcepts.nl', it turns out that those guys made the application for McDonald's.

Anyway, when we visit the first domain we get the actual FriesHit game, so the first thing I did was checking the source code of the website. I found one JavaScript file called 'main.js', and after opening that I hit the jackpot.

Since most of the previous decisions are based on guesses, I wanted to confirm that my guesses where correct. Remember variables a, b, c, d, e and f that get send in the 'saveScore' request? Let me show you how they are handled in the game code:

The code shown here was found by searching for the 'saveScore' string in the JavaScript file. This code proves that our guesses where correct, the 'btoa()' function is used to convert to Base64, the name of the arguments in that function is pretty close to the ones we figured.

We also guessed that there are only two occasions to send a packet. One when we finish a level, and once when we die. We can confirm this by looking for all POST requests on the /game/saveScore URL. It turns out there are only two of them, and the first one I have already shown. Here is the second one:

We have confirmed our black box testing results, and can now proceed to finish the application. 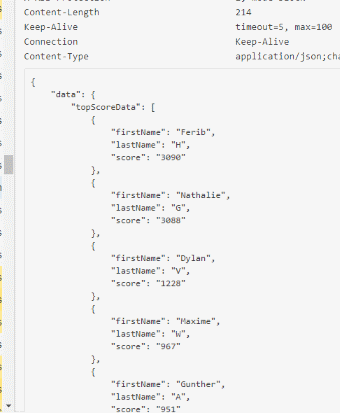 I reproduced that API call and created a function in my project so that it's able to check who is currently having the highest score. My project will scan the leaderboard every X minutes, check if the user with the name "Ferib" is placed at number one. If this is not the case, then the tool will check the score and my bot will start simulating packets to get back on number one.

Screenshot of the leaderboard

The project can be found here on Github.

NOTE: After informing the developers of said minigame, they responded saying that they do server-side checks to detect any cheaters. Not only did they give me permission to publish the article, but they also gave me a possible job opportunity for the future!