That's right, we will be looking into the two different obfuscation techniques as listed below.

Before we start with the actual obfuscation of the IAT import table, let me explain what imports really are.

One of the first things I'd like to figure out about a program when I'm reversing is where it invokes the Operating System. In our case, we will focus on Windows 10 as most video games are only working on a Windows-based operating system. Anyway, for those who didn't know yet, Windows provides a bunch of important Dynamic Linked Library (DLL) files that almost every Windows executable uses. These DLLs contain functions that can be 'imported' by Windows executables, allowing them to load and execute the function of a given DLL.

Why are they important?

Another such DLL is the ws2_32.dll, which is responsible for almost any network activity by using one of the following functions:

Now you may ask, what's the point of knowing this? Well, if you take a binary and throw it into a disassembler such as IDA, the first thing a person like me does is check all the imported functions to have a rough idea of what the binary is capable of. For example, when ws2_32.dll is present in the imports then the binary may connect to the internet.

We may now want to take a deeper look and also check which ws2_32.dll functions are used. If we take the Socket function and find out where it's called we can check its arguments, allowing us to easily figure out which protocol and type are used after we google the function name. 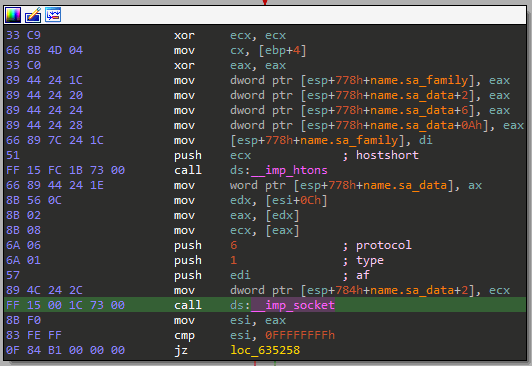 NOTE: IDA has automatically added comments to the disassembly.

Anyway, those Windows functions reveal quite a lot of information as they are well-documented functions. Therefore one may want to hide its presence to hide what is going on.

All these imports you may see in your disassembler are loaded from the Import Address Table (IAT), which is referenced somewhere inside the PE headers of the executable. Some malware/games try to hide these import addresses by not pointing to the DLL function directly. Instead, a trampoline or detour function may be used.

For this example, we are looking at a sample that is using a trampoline-ish obfuscation, as you can see below:

The address below, 0x7FF7D7F9B000 which references our function 0x19AA1040FE1 is looking completely different. You may think this is junk code, but have a good look and you will find out it's not.

Take a good look at the first two instructions, starting with mov rax, FFFF8000056C10A1 followed by jmp 19AA1040738, except everything after that is complete junk. Anyway, let's take that jump and see where it takes us to:

Look at that, 4 more valid instructions, this time it's an XOR and 2 ADDs followed by yet another jump. Let's repeat this process a few more times...

Finally, we reached a jmp rax instruction! In case you didn't notice, all the XOR, SUB, and ADD instructions have been performed on that Rax register, meaning that this may contain the actual pointer of our imported function. Let's do the math and find out. 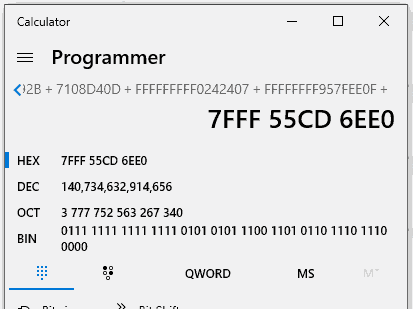 And indeed, after doing the math we obtain the pointer to ADVAPI32.RegOpenKeyExA, cheers!

Now, all we have to do is repeat this a few hundred times and we have completely deobfuscated the IAT import tables.

I don't think any of you want to repeat this process by hand using the calculator, doing it once was already a pain in the ass. From now on we will be using C# to automate the calculations for us. As you may have seen we only faced ADD, SUB, and XOR operations that were done on the same register. The reason for that is Rax is used as a return address whereas registers such as Rcx, Rdx, R8, R9, and some others are not callee safe and may conflict with the calling conventions. This means we won't even need a disassembler as we can easily differentiate these instructions ourselves thanks to the minimal usage of registers and opcodes.

I'm afraid I won't go into any more details as I explained the obfuscation technique in much detail.

Another valuable source of information while reversing a binary is the assembly instructions themselves. For humans, they may be hard to understand, but for decompilers such as IDA, we can simply press F5 and IDA will generate that oh-so-sweet pseudo-code that we humans can understand.

Okay if you're not quite following then let me show you some visuals to help you understand. The first image shows jbe which lands inside another instruction. 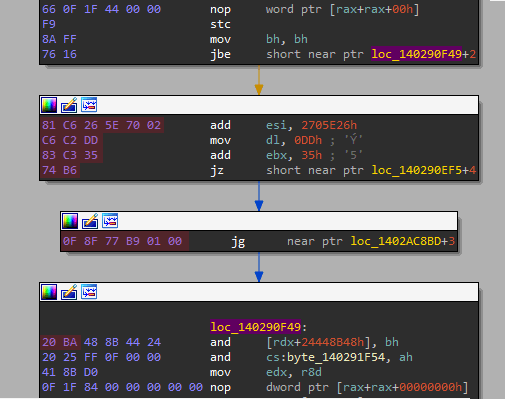 Now take a deep look at the second image below, all I did here was NOP the two bytes of the last instruction so that my IDA reveals the hidden instruction underneath the and [rdx+24448B48h], bh instruction. 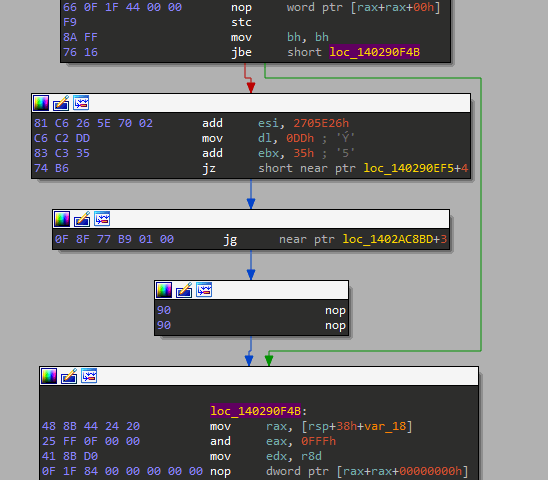 We may also patch the conditional jump with an unconditional one to make sure IDA won't fall for it again.

Before we continue I would like to show one last example as the previous one was a very basic one. Things become a lot more complicated when you start chaining these obfuscated jumps into each other, as you can see in the image below. 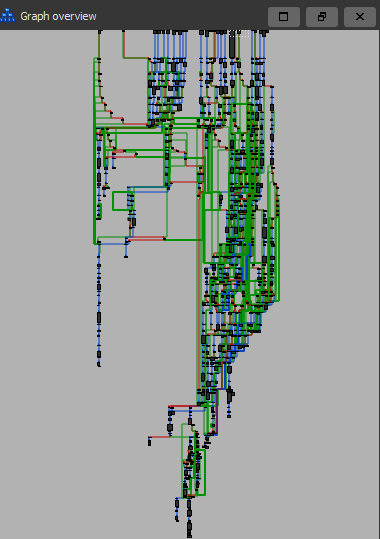 This image only shows the chaos it creates in the control flow, but just imagine how hard my CPU was suffering while IDA did its very best to create this graph based on junk instructions.

Now you may wonder what the deobfuscated functions look like? I'm glad you asked! 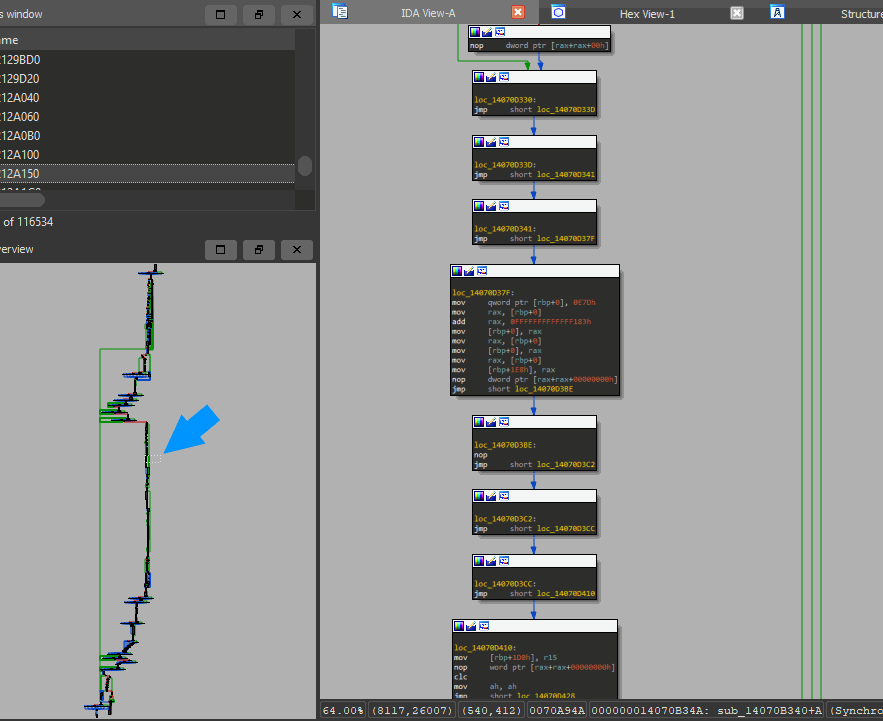 See that little blue arrow I drew on the left side? that shows what the right part is zoomed in on. Now have a look at the right side and you will see seven deobfuscated jumps in just that small part of the function. Just imagine how much time one would need to deobfuscate this manually or semi-automated (IDA script to NOP jmp). Doing that one by hand using an IDA script took me already 40 minutes... and that's just for one damn function. Imagine how many other functions I would need to do to find what I was actually looking for!

Okay, so now that we have a good understanding of how it works we just need to automate it. As I mentioned before, I used an IDA Script before to just patch the unconditional jumps and NOP slide the junk out.

However, this still took me 40 minutes to clean as the hardest part was to identify the opaque branches. So how do we solve this? You may think we should examine every conditional jump and check if it's opaque, then NOP slide and repeat? WRONG!

Let me tell you a secret, we don't give a shit about what's opaque or whatnot. All I really care about is that my IDA can give me decompiled code when I hit F5, which indeed won't happen as long as these obfuscated jumps force junk to collide into real assembly instructions.

But does that mean we need to figure out if a conditional jump is opaque or not? nope, all we need to do is check if the jump collides inside an existing instruction and then patch out that instruction as seen in our first example.

Now that we know how to solve the issue we can start diving into the algorithm I came up with to deobfuscate all instances for this kind of obfuscation.

NOTE: this is pseudo-code, I am aware it doesn't run! (seriously)

Pretty big huh? little more difficult to understand than the IAT Import deobfuscation as we used an actual disassembler library to get the size and mnemonic of each instruction. Using the disassembler is almost a must as we also had to figure out if an instruction collided with each other.

There are plenty of comments in the pseudo-code to give you a better understanding of how things should work.

The main function will keep track of already discovered chunks while it recursively invokes DeflowChunk for the linear disassembly. Keeping track of newly discovered chunks is done through lists and loops as it would trigger a StackOverflow due to the high amount of branching instructions that can be done in a single block.

In case we don't have a lastTarget set we will check if the current instruction is a ConditionalJump that jumps within the range of our buffer (isJmp flag) and set the lastTarget to the destination of the ConditionalJump.

Once we have such lastTarget we take our current instruction pointer and subtract it by lastTarget to calculate how many more bytes we need to disassemble (stepsLeft).

After calculating the stepsLeft we check if the value equals zero. If the value is above zero we will continue the linear disassembly.

When the stepsLeft is below zero it means that the assembly has collided with the next instruction. This most likely means that our last ConditionalJump that was responsible for setting our lastTarget is an opaque condition, meaning our current chunk will most likely never be executed and is instead used to overlap the next few legit assembly instructions.

This process is then repeated multiple times for every call or conditional jump it finds during its linear disassembly process.

Not only malware but also legitimate software like video games tend to use these kinds of obfuscation techniques to hide as much valuable information in the hope to prevent the reversal of the software. However, as you have seen we have successfully deobfuscated these two techniques and were able to reveal all hidden information.

Originally I was going to benchmark a popular video game where one instance is the original binary and then benchmark again but with a deobfuscate binary - which should use fewer resources due to removal of junk and opaque branching - to then see how much of a performance impact these obfuscation techniques have. But due to my legal history, I decided not to do so.

Anyway, we can still conclude that these obfuscation techniques do a very good job of wasting my valuable time, which is a good way to prevent people from reversing software. On top of that, the Deflow algorithm itself takes several minutes/hours (depending on the file size) to deobfuscate the complete control flow of a binary.

With that being said I hope you learned something from my journey.
Oh and for those who didn't notice, or in case you scrolled all the way down to find a download link...
You can study the DeFlow pseudo-code instead ;)